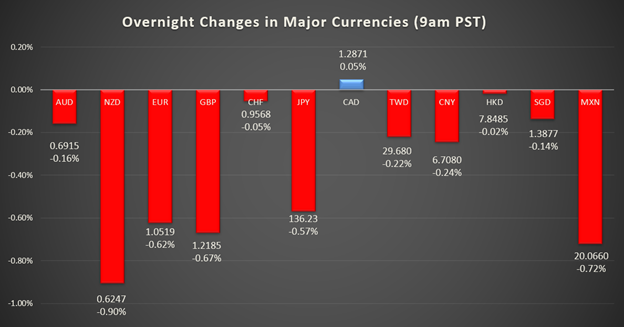 United States (U.S.) Personal Income Increases 0.5% In May, In Line with Estimates; Weekly Jobless Edge Down To 231,000

Meanwhile, the report showed that personal spending edged up by 0.2% in May after climbing by a downward 0.6% in April. Real personal spending, excluding price changes, fell by 0.4% in May after rising by 0.3% in April. With income increasing by more than spending, personal saving as a percentage of disposable income rose to 5.4% in May from 5.2% in April. A reading on inflation said to be preferred by the Federal Reserve showed the annual rate of core consumer price growth slowed to 4.7% in May from 4.9% in April. 06/30/2022 - 09:53:00 (RTTNews)

German unemployment increased unexpectedly in June as the Ukrainian refugees are added in job centers as people searching for jobs, official data showed. The number of people out of work increased sharply by 133,000 from May when employment declined by 5,000, data published by the Federal Employment Agency reported. Economists had forecast another fall of 6,000. The jobless rate rose to 5.3% in June, the highest since November. The rate was forecast to remain unchanged at 5.0%. Unemployment and underemployment increased sharply in June due to the fact that the Ukrainian refugees are now being recorded in the job centers and are therefore visible in the labor market statistics. In May, the number of unemployed decreased by 13,500 from April to 1.24 million, according to the labor force survey results from Destatis. The jobless rate dropped to an adjusted 2.8% from 2.9% in April. On an unadjusted basis, the unemployment rate came in at 2.7% in May versus 3.7% in the same period last year. Data released by Eurostat showed that the euro area unemployment rate dropped to a new record low of 6.6% in May from 6.7% in April. 06/30/2022 - 08:11:00 (RTTNews)