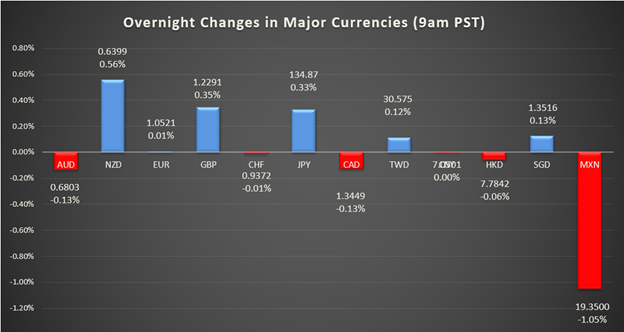 A closely watched report released by the Labor Department on Friday showed employment in the U.S. increased by more than expected in November. The report said non-farm payroll employment jumped by 263,000 jobs in November after surging upwardly by 284,000 jobs in October. Economists had expected employment to shoot up by 200,000 jobs compared to the addition of 261,000 jobs originally reported for the previous month. Meanwhile, the Labor Department said the unemployment rate held at 3.7% in November, unchanged from October and in line with economist estimates. 12/02/2022 - 08:38:00 (RTTNews)

Eurozone PPI inflation slowed for the second consecutive month in October, reflecting a notable reduction in energy price growth, Eurostat reported. Producer prices registered an annual increase of 30.8% after a 41.9% rise in September. Although inflation eased for a second month and remained below economists' forecast of 31.5%, factory gate prices remained elevated. Excluding energy, PPI came in at 14.0%, slower than the 14.5% in September. The annual PPI was driven by the 65.8% rise in energy prices. Energy prices had increased 108.0% in September. Prices of intermediate goods grew by 17.4% and that of capital goods by 7.5%. Durable and non-durable consumer goods prices increased by 9.8% and 16.0%, respectively. Compared to September, producer prices decreased by 2.9% due to the 6.9% fall in energy prices. Prices were forecast to fall 2.0% after the 1.6% increase in September. Producer prices in the EU27 increased 31.2% from the last year, following September's 41.4% surge. MoM, producer prices slid 2.5%, in contrast to the 1.4% increase in September. 12/02/2022 - 07:41:00 (RTTNews)

Germany's exports declined for the second month in a row, as the global demand continued to be damped by high inflation and supply chain disruptions, and the biggest euro area economy is near recession. Yet, the trade surplus increased notably due to the sharp decrease in imports. Shipments logged a monthly drop of 0.6%, following September's 0.7% decrease, Destatis reported. The pace of decline was double the expected 0.3% fall. At the same time, the monthly reduction in imports deepened to 3.7% from 2.2%. This was also bigger than economists' forecast for a 0.4% fall. As a result, the trade balance closed in October with a surplus of EUR 6.9 billion, higher than EUR 2.8 billion in September. In the same month last year, the surplus was EUR 12.2 billion. Exports to the Eurozone countries dropped by 2.9%, and imports from the currency bloc decreased by 5.2%. Most German exports went to the United States in October.

Nonetheless, exports decreased by 3.9%, but imports from the U.S. climbed by 2.7%. Meanwhile, shipments to China remained unchanged, and imports from the Asian country gained 0.8%. Elsewhere, a survey among German exporters conducted by the ifo Institute showed an improvement in their expectations. Currently, positive and negative assessments are roughly balanced. 12/02/2022 - 07:24:00 (RTTNews)